“Driven by the need to partly replace fossil transport fuels and by food versus fuel and highest possible GHG mitigation considerations, large efforts are dedicated to the development of technologies for the production of biofuels from lignocellulosic raw materials. A high number of projects are being pursued, but only few facilities in the demonstration scale are actually operating. The technologies applied vary widely, as do the raw materials of choice. This report gives an overview on 66 projects that are being pursued currently, and provides details on the facility size, feedstock in use and technology applied. About 50 companies have provided data on their projects directly to the authors. The report shows that currently many facilities in the demonstration scale are under construction and will hopefully successfully demonstrate biofuels production from lignocellulosic raw materials in the near future. Plans exist to build larger commercial facilities and thus rapidly increase the production capacities. Despite the possibly fast development, the volumes of lignocellulosic biofuels to be produced in the next five years will be small as compared to the current production of conventional biofuels. High efforts still need to be made to pursue these and more demonstration activities and to quickly multiply facilities when technologies have proven their technical and economic feasibility. While this report gives an overview on the status by mid 2010, all data on these projects is also available in the internet (http://biofuels.abc-energy.at/demoplants/) and will be updated and expanded to new projects throughout the years to come.” 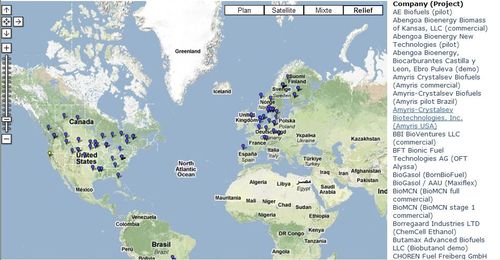