Since taking over as New York City's Commissioner of the Department of Transportation in mid-2007, Janette Sadik-Khan has taken on the challenge of making NYC streets more bike & pedestrian friendly while emphasizing livable streets and re-orienting them to accommodate all modes. She and her staff have done it quickly with innovative concepts, thinking outside the box and drawing on successful street designs from around the world to come up with a NYC model that is already changing the way our city feels.

With the NY State Department of Transportation and the New York Police Department, NYCDOT opened a new Joint Traffic Management Center (JTMC) in Long Island City in November 2008. The Center brings together in one room all of the agencies responsible for detecting and responding to roadway incidents within the five boroughs. Staff from NYSDOT, NYCDOT and NYPD observe camera feeds aroundthe- clock and share information on the exact nature of unplanned occurrences and the appropriate response. The JTMC also has several means for notifying the public of highway incidents. Staff can activate any of the nearly 100 electronic variable message signs along the roadways and provide Highway Advisory Radio announcements to notify travellers of area delays. 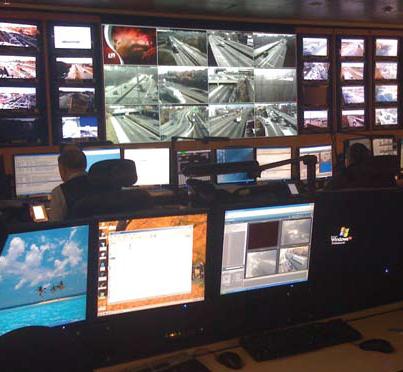 Sustainable streets are described below with many actions on transportation :

Ny ss09 update_lowres
View more documents from transportsdufutur.
The New York City Street Design Manual provides policies and design guidelines to city agencies, design professionals, private developers and community groups for the improvement of streets and sidewalks throughout the five boroughs. It is intended to serve as a comprehensive resource for promoting higher quality street designs and more efficient project implementation.
First released in May of 2009, the Manual is the product of an inter-agency Task Force headed by the Department of Transportation and joined by the Departments of Design and Construction (DDC), City Planning (DCP), Environmental Protection (DEP), Parks and Recreation (DPR), Buildings (DOB), the Economic Development Corporation (EDC), the Landmarks Preservation Commission (LPC), the Design Commission (DC) and the Mayor's Office.
The Manual builds on the experience of innovation in street design, materials and lighting that has developed around the world, emphasizing a balanced approach that gives equal weight to transportation, community and environmental goals. It is designed to be a flexible document that will change and grow, incorporating new treatments as appropriate after testing. The use and continued development of the Street Design Manual will assure that New York City remains a leading innovator in the public realm as it becomes a greater, greener city.
The Street Design Manual is available for download below as a PDF, either as one complete document or in individual sections. For print resolution, download individual chapters below:
Cover, Forewords, Table of Contents, Acknowledgements, Introduction & Street Design Policy (26.11 MB)
Chapter 1: Using the Manual (20.2 MB)
Guidelines for incorporating the Manual into the design process.
Chapter 2: Geometry (71.5 MB)
A "toolbox" of geometric street treatments to enhance safety, mobility and sustainability.
Chapter 3: Materials (48.2 MB)
Specific materials with recommendations for use, and references to appropriate specifications.
Chapter 4: Lighting (28.4 MB)
Street and pedestrian lights that meet energy-efficiency, technical and visual quality criteria.
Chapter 5: Furniture (9.76 MB)
Freestanding e
lements that are part of NYCDOT's coordinated street furniture franchise and site furnishings used by other agencies.
Glossary & Appendices (2.71 KB)
autorité des transports
0 commentaire
0
Facebook Twitter Google + Pinterest