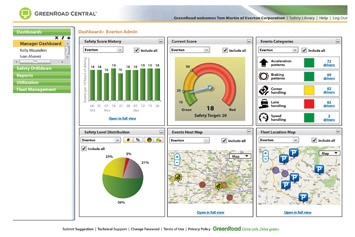 GreenRoad — a driving system that can improve fuel efficiency and reduce crashes. This morning GreenRoad announced that it has raised another $10 million from the Generation IM Climate Solutions Fund, which was created by investor David Blood and former U.S. Vice President Al Gore. The so-called Blood and Gore duo join a long list of investors including Richard Branson’s Virgin Green Fund, and the VCs at Benchmark Capital.

GreenRoad’s system uses sensors, an accelerometor, GPS and customized algorithms to calculate the relative risk of different driving maneuvers, then communicates that to the driver by illuminating either a red, yellow or green light. Installed mainly on commercial fleet vehicles (80 fleets so far), the device can have its algorithm customized according to a customer’s priorities, and it communicates information via cellular networks to GreenRoad’s data center.

“The brains are in the vehicle,” GreenRoad marketing chief Eric Weiss told us earlier this month, so even in areas without cellular coverage, drivers “always get real-time feedback.” Earlier this month Earth2Tech’s Josie explained the service as “think of it as a friendly backseat driver with a remarkable mind for calculating risk and a keen ability to cut your fuel use and emissions.”

The crucial part of GreenRoad’s tool is the real-time service. It’s only through constant reminding that the driver will change his/her behavior. Without that piece the service would just be a more high-tech driving lesson. The Prius’s dashboard has been one of the pioneers of showing how drivers will utilize real-time information to affect their driving decisions.

Companies that are building tools for the power grid, like home energy management dashboards, are also starting to embrace real-time data. The California Public Utilities Commission has said that it wants the the big investor-owned utilities to provide customers and approved third parties with “near real time” data from smart meters. Check out this piece I wrote last year about how important real-time data is for changing home energy consumption and also for delivering innovation.

GreenRoad isn’t the only one looking to provide real-time driving feedback to make transportation more efficient. A lot of the big car companies are starting to investigate this space. Ford has developed an instrument cluster that provides basic information. Honda developed a video game-like system called “Eco Assist” for its new Insight that’s meant to not only provide fuel-efficiency feedback, but also “actually help drivers to learn a better way of driving through instruments and electronic indications,” as chief engineer Yasunari Seki told us last year. And last year Volvo unveiled a prototype of its CO2 “pedometer” software, which lets mobile-phone users track their daily travels and carbon footprint. (For more about some of these services check out GigaOM Pro, subscription required.)

GreenRoad launched commercially in 2007, but was founded 7 years ago. The company has now raised close to $50 million.