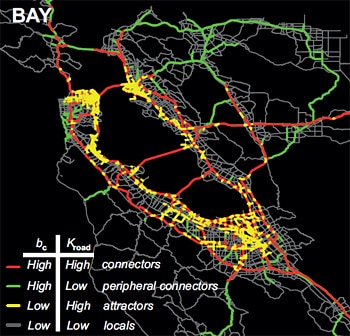 “This is a preliminary study that demonstrates that not all drivers are contributing uniformly to congestion,” said coauthor Alexandre Bayen, an associate professor of electrical engineering and computer science and of civil and environmental engineering at UC Berkeley. “Reaching out to everybody to change their time or mode of commute is thus not necessarily as efficient as reaching out to those in a particular geographic area who contribute most to bottlenecks.”

He noted, however, that while the researchers’ computer modeling suggests that this strategy works, it remains for policy makers to decide whether it is practical or desirable to target specific geographic areas.

Lead researcher Marta González, an assistant professor of civil and environmental engineering at MIT, and former MIT postdoc Pu Wang, now a professor at Central South University, used three weeks of cellphone data to obtain information about anonymous drivers’ routes and the estimated traffic volume and speed on those routes both in Boston and the San Francisco Bay Area. They inferred a driver’s home neighborhood from the regularity of the route traveled and from the locations of cell towers that handled calls made between 9 p.m. and 6 a.m. They combined this with information about population densities and the location and capacity of roads in the networks of these two metropolitan areas to determine which neighborhoods are the largest sources of drivers on each road segment, and which roads these drivers use to connect from home to highways and other major roadways.

To double-check this method, Bayen and graduate student Timothy Hunter used a different set of data obtained from GPS sensors in taxis in the San Francisco area to compute taxis’ speed based on travel time from one location to another. From that speed of travel, they then determined congestion levels.

“One of the novelties of this work is that it used two very different sources of cellphone data to complete the work: cell tower data, which is relatively inaccurate for positioning, but provides good information about people’s approximate location and routing, and GPS data, which provides very accurate positioning information, useful for precise congestion level assessment,” he said.

In the San Francisco area, for example, they found that canceling trips by drivers from Dublin, Hayward, San Jose, San Rafael and parts of San Ramon would cut 14 percent from the travel time of other drivers.

“This has an analogy in many other flows in networks,” González said. “Being able to detect and then release the congestion in the most affected arteries improves the functioning of the entire coronary system.”

Because the new methodology requires only three types of data — population density, topological information about a road network and cellphone data — it can be used for almost any urban area.

“In many cities in the developing world, traffic congestion is a major problem, and travel surveys don’t exist,” González said. “So the detailed methodology we developed for using cellphone data to accurately characterize road network use could help traffic managers control congestion and allow planners to create road networks that fit a population’s needs.”

Katja Schechtner, head of the Dynamic Transportation Systems group at the Austrian Institute of Technology and a visiting scholar at the MIT Media Lab, is a co-author on the Scientific Reports paper with González, Wang, Bayen and Hunter.

The study was funded by grants from the New England University Transportation Center, the NEC Corporation Fund, the Solomon Buchsbaum Research Fund and the National Natural Science Foundation of China. Wang received funding from the Shenghua Scholar Program of Central South University.