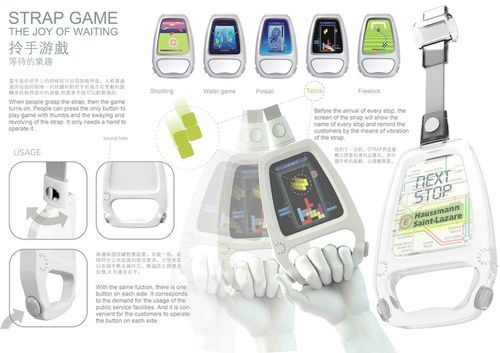 Here’s a great design concept from Chinese designer Jiang Qian, who has a vision to gamify the straps that passengers grip while standing on trains. His idea for a Game Strap is a pretty creative one, and we hope that one day it becomes a reality.

The design would include a display is powered by the grip of your hand, and when you let go the game is over. It would also alert you via the display and a vibration when you’re arriving at a station, so that you don’t get carried away and miss your stop.

Admittedly, it would be expensive to outfit a train with so many of these Game Straps, although perhaps ad agencies might get in on the action with branded games — because if you’re going to be bombarded with ads on a subway, it would be nice to enjoy them at least.

Here in Tokyo, such a device would have to compete with people’s smartphones, Nintendo DSs, and PSPs for attention. Perhaps a network of Game Straps that creates a social game that everyone on the train could play? It might be fun if such a game was created to connect individuals riding together rather than isolate them.