The study, HEI (Health Effect Institut) Research Report 155, The Impact of the Congestion Charging Scheme on Air Quality in London, was led by Professor Frank Kelly of King’s College London as part of HEI’s research program to measure the possible health outcomes associated with actions taken to improve air quality.

Although the London CCS was designed to improve traffic and not necessarily air quality, early projections had suggested it could improve air quality as well. Kelly and his team used a multifaceted approach to explore the impact of the Congestion Charging Scheme on air quality:

a variety of emissions and exposure modeling techniques, analysis of air monitoring data, and a newly developed assay for the oxidative potential of particulate matter collected on filters at urban background and roadside monitors. Despite their high-quality and comprehensive efforts, the investigators did not find consistent evidence of improved air quality resulting from the CCS. In part it is difficult to identify significant air quality improvements from a specific program – especially one targeted at a small area within a large city — against the backdrop of broader regional pollutant and weather changes. Also, some behavioral adjustments among the population, e.g. increased diesel-powered taxi and bus trips to transport people into the zone, may have offset any benefits. Finally, other changes occurring at the same time (e.g. the introduction of more filter-equipped diesel buses in response to a separate rule) likely also affected air quality and obscured effects of the CCS. 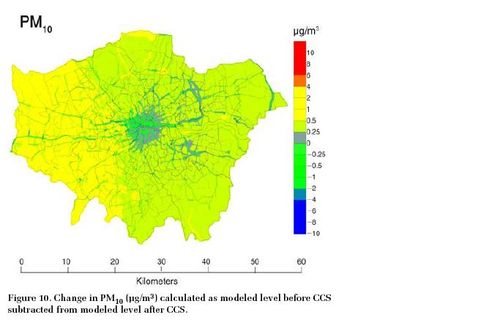 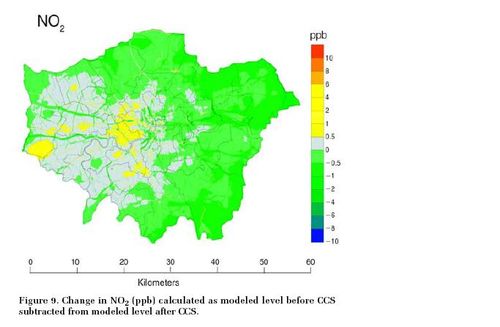 “The Congestion Charging Scheme was one of the first to be implemented in a major city in Europe or the US – and did show measurable reductions in traffic volume – but air pollution does not know precise boundaries so any benefit of the CCS or air quality appears to have been lost in the larger regional pollution mix,” said Dan Greenbaum, HEI’s President.

Overall HEI’s Review Committee concluded that Kelly and colleagues’ investigation represents a creative effort to explore a subtle change in air quality associated with a complex intervention to reduce traffic congestion. Although they were unable to demonstrate a clear effect of the CCS either on individual air pollutant levels or on oxidative potential of particulate matter, their study offers many lessons for future studies of interventions that are expected to influence air quality.

Professor Frank Kelly from the Environmental Research Group at King’s College London, said: “The London Congestion Charging Scheme was a world leading traffic intervention aimed at controlling excessive vehicle flows in central London. The findings reported in this HEI study will hopefully be of use to other administrations considering introducing traffic management schemes so that they can achieve vehicle reductions as well as improving air quality at the same time.”