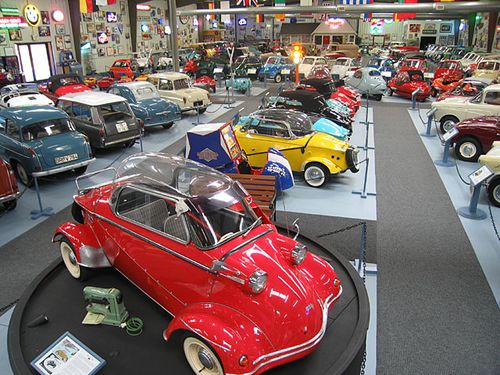 The microcar, a vehicle born out of need, was a child of its time and became the symbol of a people's spirit.

World War II came to an end in 1945 and Europe lay in ruins. A shell-shocked population came out of the bomb shelters and faced an unimaginable scene of devastation and ruin.

As if the seemingly endless task of clearing away the rubble wasn't enough, there were crippling shortages of food, raw materials, electricity and gas. Value and worth were measured in Chesterfield cigarettes.

The population collectively rolled up its sleeves and went to work. The astonishing rebuilding of an entire continent over a period of ten years was accomplished through a unity of spirit and purpose unimaginable today. Bright, talented engineers, many out of the former aircraft industry, put their minds to the problems of mobilizing the population under adverse conditions. It's said that the true master reveals himself within limitations and so this focusing of energy and talent resulted in an enormous variety of small vehicles; some successful, others less so – but all of them interesting!

Energy and Transports in Europe