$10 million in prizes will be awarded in September 2010 to the teams that win a rigorous stage competition for clean, production-capable vehicles that exceed 100 MPG energy equivalent (MPGe). Program is described here.

Planning is presented below : 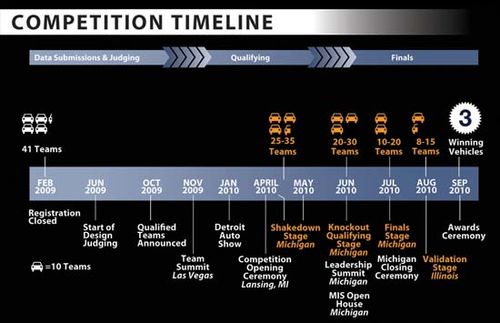 Qualified Teams have passed the second judging stage of the Progressive Insurance Automotive X PRIZE. After acceptance of their Registration Application, these teams have gone on to pass a series of rigorous reviews of their Business Plan and Technical Specifications. They are now working to meet the challenges of the track events, which begin at the end of April 2010.

These competitors come from a variety of backgrounds ranging from large auto manufacturers to independent backyard inventors. They heard the call to action and decided that they can make a difference.

Each team has a different strategy for winning the Progressive Automotive X PRIZE, and each idea has the potential to revolutionize the world. Their stories are inspiring, and we are pleased to provide you with the opportunity to get to know each of our competitors. Follow their progress through their blogs, videos and press articles to see how they are making a difference in your world.

All teams selected are presented here. For example, APTERA describe their vehicle in details, with films, links, twitter, facebook… but also TANGO, TATA…