Accueil Long road ahead for emissions in Beijing

Long road ahead for emissions in Beijing

[lien article] Expatriates who have lived in Beijing for a long time have recently been squinting with disbelief when looking at the sky. At the end of last month and beginning of this month, residents of the capital, who are accustomed to seeing acrid smog in winter, were treated to two weekends of gloriously blue days. 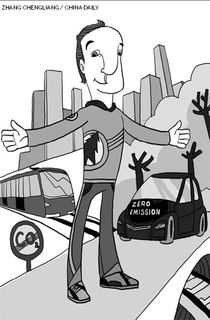 And last fall, the month of October was marked by a long string of clear days. In fact, through September of last year, the government counted 221 days in which the 500 pollution index (which measures particulate matter less than 10 micrometers in diameter) was below 101, compared with just two days with dangerously high pollution levels.

More so-called "blue sky days" were recorded last year than any year since the daily measurements were first published in 1998. Sulfur emissions in Beijing have been cut in half, while industrial dust has decreased by two-thirds. Although outside experts have said the city's measurements of air quality is imprecise and misleading, there is no question that Beijing's air has improved markedly. And this improvement stems from aggressive actions taken by the government to address air pollution.

These measures include major steps to reduce the pollution caused by motor vehicles. Three new subway lines have been added since 2008 and both subway and bus fares have been reduced. Over a fifth of the city's 20,000 buses now run on clean-burning natural gas. Since 1999 the city's new-car emissions standards have gone from nonexistent to Euro 4, the same standard that is currently enforced across the EU.

People are being offered large cash rebates to trade in old, high-polluting vehicles for newer ones; authorities have also ordered a 90 percent reduction in the sulfur content of gasoline. Prior to the 2008 Beijing Olympics, an odd-even license plate number based driving regimen effectively banned half of all private cars from driving on weekdays. A modified version, banning one in five cars each day, is now permanently in place. Heavy trucks are prohibited from driving in the city during the day, while the oldest and dirtiest "yellow label" cars are barred from Beijing altogether.

However, despite this progress, much remains to be done. For example, in 2008, the average concentration of particles in the city's air was six times higher than the ideal standard set by the World Health Organization.

Moreover, the most difficult work in improving air quality in Beijing surely lies ahead.

The easy steps that can generate quick and dramatic reductions in air pollution have now all been taken. And every day 1,500 new vehicles join the roughly four million cars and trucks clogging Beijing's sclerotic roads.

I grew up in California and lived there most of my life before coming to China in 2005. Along with its hi-tech and entertainment industries, California is famous for its smog. And the state's efforts to grapple with air pollution are indicative of the big challenge Beijing faces in further improving its air quality.

These measures have been effective – carbon dioxide exhausts from individual vehicles have been reduced by 80 percent since the 1980s, while nitrogen emissions have been cut by 50 percent to 67 percent.

However, over the same period, the population of California soared and commuting times also increased dramatically, thanks to suburban sprawl. These trends have offset the reduction in vehicle emissions.

Indeed, the state's most rapidly growing area, the central valley, is now the worst air basin in the US and its childhood asthma rates are several times higher than the national average.

China's rising affluence ensures that car ownership and the number of vehicles on the road in the capital will rise even further.

This makes a major shift toward zero emission vehicles a necessity for the continued improvement of Beijing's air.

California Governor Arnold Schwarzenegger recently tried to impose a zero-emission mandate in California, but the effort was blocked by automobile and energy industry opposition.

The Chinese government is much less constrained by such special interest group politics and has been aggressively promoting green power.

In addition, unlike America's cash-strapped national and state governments,

China can afford to invest massively in alternative energy and public transportation.

China will certainly need to accelerate the development of green vehicles.

And as the roads here become increasingly jammed – expatriates refer to rush hour on the Third Ring Road as the city's longest parking lot – more motorists might be persuaded to do less commuting by automobile.

However, this will happen only if Beijing's public transportation system is further improved. If these things can be done, all of us living in Beijing will be able to breathe a little easier in the future.

The writer is a corporate trainer in Beijing.